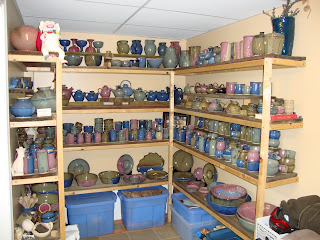 I spent 2 hours pricing my gallery full of pottery in prep for the start of my market season, with this injustice working around and around in my mind. Generally, I have a good grasp of my thought processes and can keep a lid on the things that bother me by writing about them and then going for a run or a bike ride. It almost always works but when things happen that aren't fair (shame on my parents for telling me things should be fair or even that such a thing exists, hahaa) it sticks in my head. Well this is one of those things and as the leader of the Market I was powerless to negotiate any reduction in fees at all or convincing anyone to justify their price.

It is amazing to me how many hours we have put in to get the Market ready to start up at new season tomorrow. More meetings than I can count with all sorts of people from the City and the DBIAS to the committee level within the Board of the Market to the newspaper reporter on Wednesday after our landmark deal to pay rent for using the Square downtown and Ingram Street. I watched my hair turned grey as we tried to negotiate with the board of the 'bia'. It's never a good time to give the meaning of a word in a rant but negotiating doesn't include standing on a tiny soap box and repeating 'give us all the money we want' over and over.

The market group wanted to reduce the rent that we pay for the time we use the Square on Saturdays as it is pretty high so we looked at the rent that other Markets around BC pay and collected the numbers. Whistler closes their beautiful shopping area to cars and hosts the lovely Market and they don't charge anything!! The reasons they gave were that they really appreciate all the public attention and attendance that the market brings into their midst that would otherwise go elsewhere if the Market weren't working hard to draw people in. The Moss Street Market closes a city street and also pays nothing in rent to anyone for doing so, again the idea is that it is a way to create urban culture and an interface between the people who grow food locally and make art and crafts with the general public, in that case city dwellers. Cedar Market also pays nothing and the Crow and Gate Pub, that allows the market to use the land in front of their pub for free, has tracked a 21% increase in sales since the Market joined them, mostly, I would imagine, due to word of mouth and advertising with the title of the business appears as the location for the Market on every publication.

We also found out that other markets around do pay rent and that ranged from 'less than $100 at the waterfront parkade in Nanaimo' to around $3000 for a Vancouver Market that shares signage costs and pays for a street closure application, like those for parades, to the City. The deal that I just signed as the president of the DFM was for thousands of dollars than that. Maybe one of the smallest cities in the world has incredibly high costs (?)or maybe we are being robbed at gun point. The Market is expecting to be around one hundred vendors strong this summer and there are very few places that we could physically go as we consume 100,000 square feet plus customer and vendor parking. This has us up against the wall for a minimally functional location and we have gone so far as to rent porta-potties in the past (ug!) So we agreed to pay.

The question of course is what are we paying for, which is a very hard question to answer. We are a completely independent body that has a half time employee to interact with anyone involved, from bookings and customers to insurance and website updates. We also have 8 dedicated board volounteers who do everything else from adjudicating new vendors to writing all the forms required to run a huge non profit group like ours. Back to the question though, and it is formally worded: 'provide via the city, power and water...ensure public washrooms are open....ensure garbage bins were delivered by city....allow use of signs....provide, from the city, parking authorization...provide access to electrical panel....not let other groups disturb the market while in session...'. Not to be an ass but, those things are mainly intangible and do not cost $400 to $500 dollars a day! No matter which form of accounting you might subscribe to. It breaks down into the physical unlocking of four doors; two washrooms, electrical room and storage room.

Having said all that, the average business that makes money using the downtown daily all year only pay around $5000 in taxes that would pay the people to water the trees, collect the garbage, sweep the streets and clean the washrooms. Again, how does the market pay 'zillions' more than that to use the Square and Ingram Street for ~40 days, again forty DAYS!?!?

There is one small part of this story that seems like even the slightest tiny ray of light and that is that the agreement includes a maximum amount of money after which we don't pay any more. This is new this year and although the cap is exorbitant, at least it exists. Like I said, a very small ray. Also, I have learned a lot about dealing with people. I used to have a job (yeah I know, you thought I was always a potter) where there was a evening poker night held in some places. The guys I worked with convinced me to play cards with them and quickly realized it simply wouldn't work. A few hands in, they saw that if I had really good cards I would bet (pennies) and if I had bad cards I wouldn't. If any of you have played poker, one honest person at the table kinda ruins it. This, as I have learned, is not the best way to negotiate with people who have you by the toe over an erupting volcano, however, I have not learned the right way to deal there. I still think that the threat and counter threat approach is not a good idea, as some people were thinking of having a protest with tractors and goats in the downtown if there was no agreement, see how much the street sweeper bill would be after that!!
Posted by Trial By Fire Pottery at 3:02 PM