What Does it Mean to be Human? 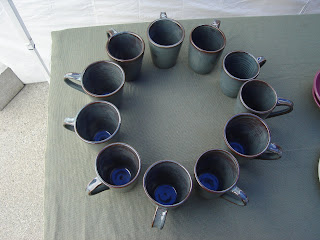 Being human is both the most simple and the most complex thing that we do. Humans create. Apart from the beautiful crow that was building it's nest in the downtown of our tiny city yesterday, creating has to do with making something that is unique to the person and the moment in which it became. We create a scrumptious meal for ourselves and loved ones when we try hard and even grow a little basil in the window sill just to compliment the perfect spaghetti sauce, smile as you pick it and drop it in the pot next time.

Humans plan. We think about things that do not exist or are not occurring and devise ways to make them or cause them to occur. I wanted to have some money to buy a smaller table that would fit on my bike trailer because the large, heavy one that I had was too large and too heavy to be useful at the market. I was off the bike for a few weeks for medical reasons and used the car to haul my work and tent etc to the market. I found that my display was much easier for the customer to touch and handle when there was more space between the pots. This is another sign that a human is present: humans learn. I watched, learned and then made a plan. I told some people that my large table was for sale and then once it sold, I took the money and bought a new, smaller table that I can now take to the Market.

Humans chose. Every time we open our mouths we make a choice to spread the warmth and love around that we have inside us or to spray hurt and anger onto those who cross our path. Being married is the largest continual choice that I make, it is made up of millions of tiny choices over years and years that build up a respect and comfort with my husband. A strong idea that I have learned over the last 7+ years of wedded life is that humour and playfulness are the most creamy salve that one can give their partner and their relationship in general.

Humans love. We have two Border Collies and anyone who has spent a lifetime or two with a wonderful dog who looks you in the eye every time it contacts you knows that other creatures are capable of love. Humans love in ways that are complex, silly, absurd, deep and painful. Love can mean bringing some one's possession inside late at night when you realize that they have long forgotten it there. Love can mean that you gently tell a friend about the many disastrous consequences of their obesity on their own life and that of their unborn child. Love can mean taking an old dog to the vet to be euthanized because each breath causes so much pain that he no longer wags it's tail when you say his name and rub his heaving belly.
Like I said, it's complex.
Being human is the hardest thing we do, it is a million choices and if we learn and plan as we go along, it can be the most rewarding gift we will ever get.
Posted by Trial By Fire Pottery at 3:09 PM