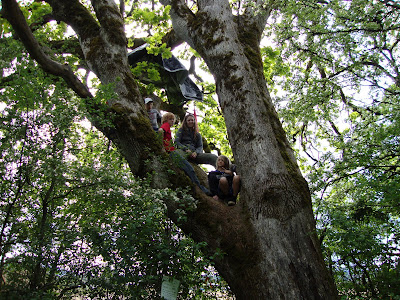 Okay, that was a very weird and painful week! I was having a pleasant morning sleep-in with my husband Dave, when we were awakened to the sound of chainsaws. It sounded like the neighbour was cutting his house in half, long, sustained high rpm, chainsaw noise. I was raised in a house that afforded Saturdays to the delicate art of cutting up wood and chopping it and loading the old pick up and then sharing tea and ginger snap cookies.
This was not the short sounds of slicing a tree into fireplace sized logs. I listened for a while in bed and then heard a sound that was also a new a terrible one, a tree hit the ground and shook the whole area! My mind raced to the park behind our block that was to be under construction to build a large baseball park. Surely they weren't cutting down those giant grand old oak trees that give the entire park it's validity. I have taken every island visitor to this park and the gravel pathway allows the dogs to run wild without vehicle traffic and the less mobile to still walk comfortably.
I had some toast and coffee and listened to this chaos and then told Dave that I absolutely had to see what was going on! I threw some clothes on and went to ask the first person I saw with a reflective vest, what they were cutting down. The lovely young lady that was directing traffic was a bit shocked to encounter my questions and I was off across the mucky, sticky ground that had been scraped clear by the bulldozers to find the contractor, in no time.
I found him in the job site special: large, white, company work truck with the window open and papers everywhere. He was a warm, friendly man only a few years older than I am with an easy smile and the firm handshake of a hard working honest man. I asked what they were cutting down and he simply got out the large area maps and showed me.
This proposed ballpark is (I'm guessing here) at least 40 acres and has a gigantic Garry Oak in the back right corner of the one side. It is a magnificent specimen, rounded, full canopy, a huge, tall behemoth, starting with a trunk thick with age, that has to be 800 years old! She is beautiful! He laughingly assured me that no one would get any where near that huge old tree as it was set aside from the beginning due to it's high public profile and stature. The crew had lovingly named the old tree the 'hanging tree' as anyone who got too close to it would have been hung. (hahahaa, he smiled wide at this)

I asked about the other large oaks just behind and further from us and he brought a strong, caloused finger over the map to the place where the survey showed two small circles that had a computer line to the words "remove existing tree" which caused me to catch my breath short. I asked him if he had seen the trees and he explained that there was a project that he was working on in Nanaimo that was halted by someone discovering a Garry Oak with a trunk the size of a pop can!
He was shocked by the Municipality suggesting that he get the faller to cut all the trees on the slope, some of which had trunks that were 6 feet across. Someone had given the workers the 'heads up' that once the public sees trees fall down they go a little crazy so they should get there and get them cut down as close to the 7am noise bylaw as possible.
As nice as this man was to me, I knew that I was going to have to do something serious about this situation. I told him that I was going to go home to get a ladder to climb the tree, I wasn't sure what he thought but he smiled and waved goodbye. I went home and raced all over the house to do something to get this tree cutting stopped before they killed any more of these monster trees. I called the muni office, the MLAs (both of them), the municipal parks and rec guy, the Sierra Club, the environmental protection branch of the government, the MP and then in desperation the editor of the newspaper. Strangely enough, the editor had a few moments to talk when all others were way to busy to talk to me, he sent out a reporter and I was to meet him by the park.
I tore through the house putting things into the red backpack that had seen me through many difficult situations; rope, water, sleeping bag,nut bars, leather gloves, a tarp, wool toque, old wool sweater....I was running out of ideas and really had no idea what I was packing for! I was jogging with the back pack by the time I saw the reporter and was right mad that it had come to this. I lead him onto the pathway takes everyone right by these huge trees.
He asked what the backpack was for and I said that if I told him he would be an accessory. That only stalls a real reporter for a minute, he asked what my plan was, what I was thinking, what I was going to do, and then followed me to the tree that was next to be cut down and took a look at all of the stumps already cut. When his eyes came back to me I had tied a rope to the back pack and was (unceremoniously) clambered up to the first bifurcation in the tree. I hauled the back pack up and started to get to know my new home.
I honestly had no idea what I was doing but I really thought that they wouldn't cut it down with me in it. Yup, that's as far as I had thought this thing through! The car was at home and I was supposed to be picking Dave up from work later that day, it was looking like he would walk home with no explanation.
So there I was in the arms of a beautiful 800 year old tree, shaking from the natural fear of heights, and absolutely no plan what-so-ever!
Posted by Trial By Fire Pottery at 10:11 PM