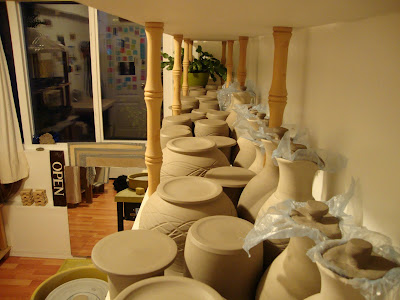 The first Craft Fair of the season for me was in Nanaimo at a large community centre and was very successful...which means that I have put away the money I need to pay rent on my studio for January! Everyone defines success differently but that is my way.
I loaded the kiln this morning and every pot fit exactly into the kiln with the last tiny bowl sitting up on a tiny stand made of two stacked kiln stilts so it is jutting up above the other pots like a tiny tower. This load will fire all day and then cool for another day and a half and be unloaded possibly this weekend before or after the craft fair that I am in this weekend.
My work and I am in Duncan this weekend for Christmas Chaos which is 12-9 Thursday and Friday and 10-5 Saturday and Sunday which amounts to 32 show hours with about 10 hours of setting up and display maintenance in the next four days. I have a food plan for Dave in that I am taking the evening to make a huge lasagna (meat free of course) that he can throw in the oven or reheat as needed. I made some jokes on my way down to the grocery store on my bike, that I had made a shopping list that just said frozen pizza!
I unloaded the kiln last night and lost only one mug and priced all the pots (which I hate doing) and paired up all the french butter dishes so they slide freely inside their mate as well as having just enough overlap of the base so it is easy to lift off. The work is strong despite the seasonal pressure and I was happy to see that the three wild teapots that went in the kiln came back out with only kiln love and not in many pieces!
I will get a few pictures before they get packed up today for the show. I can't possibly take a dozen tubs of pottery down to the show on my bike trailer so we have made a plan that I will drop Dave off at work and then go set up around 0845, giving me plenty of time. He will then get a ride to the show after work and take the car home, odd you might think that we would care where the car was or who had it as we are died-in-the-wool cyclists but his hospital in it's stupendous foresight---decided that they would not allow anyone to take their bikes into the hospital anymore!! They require you to lock your bike out in the rain to one of the old rusty railings by the side entrance, now I'm not sure but I can guess that Dave's bike will NEVER be treated as such because the shiny little guys cost more than most people's transport.
With the show season underway and my damp rack empty but for two very funky teapots I was feeling a little lost (as most workaholics do I'm sure) so signed up for a Level II Yoga and had my ass handed to me as I haven't done any yoga in quite a while. It was with amusement this morning that I observed my hamstrings and lats screaming as I bent low to put the bottom shelf in the kiln this morning and I can't wait to get on the bike to go get another ball of "capricio" wool to knit into my project this weekend at the show, and feel what my quads have to say about last night's yoga!
Posted by Trial By Fire Pottery at 1:02 PM