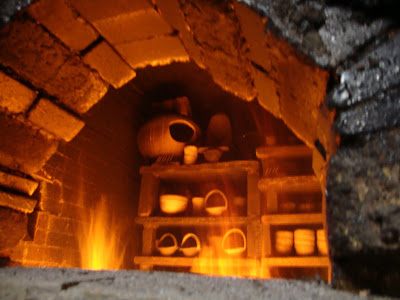 For a potter who works very hard making pots and loading kilns for a living and spends lots of long hours alone in the studio what kind of adventure day is there out there? Long hours wadding, loading and firing a huge wood fired kiln, of course!! I emailed the Tozan Kiln society last week and asked if they were going to have a firing any time soon and found out they were indeed! I went out to the Kamagawa Campus (which was remarkably hard to find) and met Ruth, Robert and Flora who were setting up to wad about a zillion kids clay works that needed to go in the kiln.
They had made up the wadding and prepared a lot before I got there and so I was there to help with the donkey work and wadding on the thursday and went out again friday to help load the Anagama kiln. They only had enough work to fill the doagie part (the first section of the 5) but it holds a lot of work and took quite some time to get ready then they bricked in the door and Flora and I spent the rest of the evening trying to heat up and dry out the huge dragon so that it would fire. I tended a tiny fire in the base on the chimney to try to start some air movement towards that end and start a draw.
I stayed and worked on the firing until 10pm, as I had to go get nurse dave from work and get some sleep so I could to get up early and pack the pots and trailer for the Market saturday morning. I smelled like a serious bushfire when I got home and spent a while with the loofa in the shower before bed and used an old firefighting trick of washing my hair and rinsing then washing again and leaving the shampoo in for a while to cut the smell of the smoke before the conditioner.
The fire was fascinating and the kiln was a work of art and history that should be a national treasure! It is a pure act of passion that built it and many small acts or heroism that keeps it alive and working. The College that allows use of the land for such a huge kiln and associated activities must see a great value in the kiln to be so welcoming!
The rest of the group of fire workers fed the flaming dragon constantly until sometime sunday morning and they all closed in the kiln (the air ports, fire box mouth and the chimney dampers) to hold the heat in as it cools down and they are planning on opening it thursday at 5pm. I will ride out to Cedar thursday after yoga and help with the tables and take down. I will also take a few more photos and put up one of the chiminea that I fired in there. I wasn't going to take it up there but I realized that the clay had been a cone 9-11 range and that it just might survive. It cost a small fortune to put the big girl in the anagama kiln which was calculated after it was inside the dragon but it will be a lovely work of art if it survives.
Now back to work and I am on to working on the down time list of chores that I haven't been able to get done during the prechristmas workathon. I am going to go get new canvas for my wedging table as I have been having to avoid wedging on two areas because the threads are all that's left and they are breaking. There are at least a box of industrial staples holding the old canvas on the table so I have to carefully decide if I am going to take the old one off before I put the new one on of if I should just cover over it. I'm trying to think about that for holding the water in longer with two layers or if the two canvas sheets would bind to each other and wear out more quickly.
I also need to make a better sign for the house studio, I have been through many manifestations but the ones made of paint on wood melt off in the rainy six months and the plastic commercial one I have up right now isn't right either. I think I want to make a new wood one (I have scavenged a few nice big pieces) but to burn/brand the letters into it and then seal the wood so it would last longer. Of course, that is completely new to me but since I was tiny I believed I could do anything so little stops me these days. Talk soon.
Posted by Trial By Fire Pottery at 9:38 AM