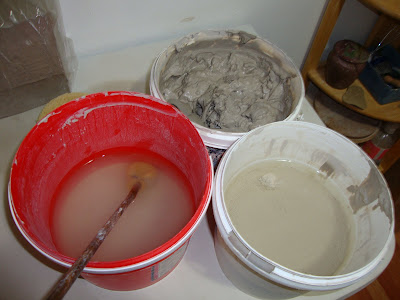 I will try to explain the three pail studio system that is very neat, tidy and efficient, without a sink and the clogs that go along.

First, I'll start with a few reasons why anyone would want to have a studio without a sink.

{1} Most studios have a sink which gets plugged regularly.

{3} I once spent an entire day in the concrete pit that was used to settle the clay from the pottery water in the Mt. Royal College pottery room (it was like being thigh deep in decomposing skin mixed with the slimiest clay on earth.....actually that was exactly what it was like plus a scratch and sniff bonus)

{4} If there is a working clay trap in your sink, the builder of that trap is probably the only one who is willing or able to deconstruct it (despite the rancid STANK), clean and rebuild it.

{5} Say the sink doesn't seem to clog at all, it just gets a little slow now and then, so you use a little drain cleaner and it goes away..........away is actually not a place, it is going to settle out somewhere and the public sewer system doesn't need ANY of the clay that you just paid 25$-35$ a box for....for some very far away people to dig out of the ground, process, blend, wet, mix, pug, bag, box, ship, and store (warm) until you fork over the cash for it!

Another way to look at it is that the three pail system keeps all of the dry trimmings in play while making use of the thick throwing water that shows up at the end of a very satisfying day at the wheel. It also means a very small amount of wedging to do on any given day (at the most a pailful).

Pail 1 is the clean water.

Pail 2 is the throwing water.

Pail 3 is the settling pail.

The next morning you start the same way, sponging the water off both the throwing pail and the settling pail (with the trimmings) and then the settled gooey clay mass is turned out onto a plaster batt to dry. The two or three day process time of this system makes for a non-horrid sludge pail smell. Once the mucky clay is dry enough to handle, simply wedge up (or pug) and use as any other clay. For anyone interested in the microscopic details; the slip has very small particles of clay (too fine for solid throwing clay body alone) and when you mix all the trimmings back into it the combination is closer to the original composition and throws and fires just fine.

The other benefit of this three pail system is that there is a LOT less water wasted as the clean water you used for cleaning up (wheel/tools/canvas) yesterday is used to throw tomorrow by putting the settled and skimmed water from throwing into the settling pail that you emptied of gooey clay earlier.

This system works beautifully even if you have a few pails of throwing water from a really busy day or a few friends making a mess of the water, simply leave the throwing water in the pails it is in and sponge off the water in a few days when it has separated and put it in the settling pail. If you find that you have a little more water to reclaim than trimmings, simply allow your trimmings to dry out completely (by a heat source or in the sun) and then add them to the settling pail dry.

Also, trying to have a low spot in the settling pail where you push the trimmings down a bit will tend to collect the water more quickly and it is easier too sponge off. This also works well for the casual studio user as longer drying and settling time (while you are away) tends to remove more water.

I have added a photo of my three pail system but my camera skills are quite limited! Try this system out for yourself, it is brilliant with no piles of scraps and no horrid stinking sludge pails or the dreaded waste of clay that you are paying over a dollar a kilo for!!
Posted by Trial By Fire Pottery at 11:30 PM