a september photo of the computer showing 2999 kms 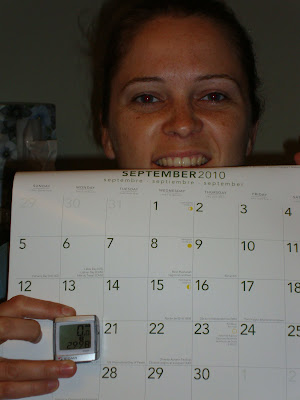 I have no idea who reads my blog other than my sister and father-in-law (which is kinda funny calling him that because he was actually with law enforcement for about 40 years) but for any others I wonder if you are married. I think about being married a lot, what it means to me and how it effects my life as an artist (small 'a' artist, but i digress). I wonder what it would be like to be married to an artist (not another potter of course because we'd starve to death) and then one day nurse dave and I are getting a new bike computer because mine broke (don't worry I had recorded that i was at 3482 kms before it died) and then we are across the parking lot in the music store, ironically called that because you can't actually buy recorded music there, and regular dave is at the piano playing 'Fur Elise'. The music store guy yells over that no one is allowed to play that particular song unless they can play the whole thing so he continues.

And that was it, all at once I was indeed married to an artist. My parents had called us about a zillion years ago when we lived in Calgary and had asked if we could drive up to Prince George to help them out with some light renovations on the house they had shared buying with my sister and her tiny son eons before that. We thought it would be fun and who doesn't love a full day of driving in a two seater MR2, in mid winter, up to norther BC, with almost no heat (the motor is in the back) and a 53lb border collie on your lap.
We did the 'timmies trip', just stopping for coffee at every timmies so we could to make it as short as possible, while one of us was in getting the coffees and snacks the other was letting the dog walk around. Of course, Pep the 53lb border collie, would only stand up--at attention with face pressed to the windshield, never sitting or resting or lying on the floor (!) for the entire ~12hour drive! My in-laws can vouch for this situation as we asked them to take care of the old dog while we worked at the YMCA for the summer and he quite literally took over their whole motor home even kicking someone off their seat for a better cockpit!

Anyways, Dad was recovering from a radical prostatectomy and needed a little help with some renovation finishing touches like stippling the ceiling downstairs, painting the stairs and railing to the top floor, tiling the kitchen, replacing the sink and plumbing in the kitchen, making the bathroom stop leaking and painting the upstairs bedrooms.

We were there for a three or four days and worked as much as we could. Handy dave and I went to a pub to watch the 'flames game' and when he jumped up cheering as they scored everyone around us in the BC pub just looked shocked as the flames were playing the canucks! Whoops! We thought we might get beat up or asked to leave, but all ended well.

The point of my historical family story is that a few months back Mom and Dad sold the old house and decided to give a little money to all the kids who had helped them look after the house for all those years. I decided to split the money with piano dave right there in the music store, that doesn't sell music, and we brought home the digital piano. It has nice balance (which i think means that the keys are hard to press down?!?!?) and the sound is 'nice for a digital'.

Now, after all these years, husband dave is sitting at the piano trying to learn new music that looks like some alien language to me and is swallowing huge clumps of time totally focused on just one thing, that is not the tv. This must be what it's like to live with someone who can sit downstairs and trim tiny bowls for three hours and then come up to tell you that their but has fallen asleep and they can't understand why!

Once again our marriage has turned a corner and changed completely. I have absolutely no idea what he sees when he reads the music, no idea how he can possibly hit the notes without looking at his fingers, how it is possible to try the same thing over and over again, how he can focus solely on one group of notes for such a long time and how he could have gone so long without a piano if he is THIS good at playing one!

Well, there it is a short story of my regular life, possibly more interesting than the pottery goings on which only entails throwing three wonderfully light teapot bodies and lids yesterday, installing a new door knob downstairs and saying that I will get started on my year end books (which had not yet occurred) Oh, and a dear friend of ours came over this morning and did a photo shoot of my pottery hauling bicycle and trailer. We did a bunch of action shots where he was (?) seat belted in and all doors and windows were closed and arms inside the vehicle at all times. I will put up a picture of two when I get them. He has sold some of his photos from the walls of Coffee on the Moon who graciously allows artists and "A"rtists to hang art there free of charge.....even if they sell a few items. Thanks, Dan, although I am sure he doesn't read my blog, happy artist love out into the world to you anyway!! Thank you.
Posted by Trial By Fire Pottery at 4:05 PM