back from a little time off ~~~LESSON INFO~~ 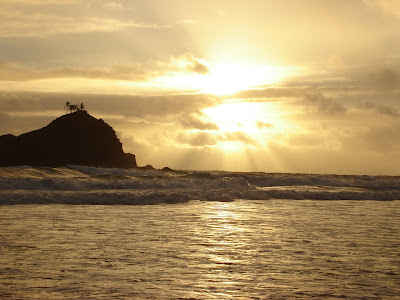 Well, here I am back at home after a vacation where I worked hard to support Dave's training schedule and read an entire book. The days started off with checking online to see if our friend was going to ride with Dave and eating one of three optional breafasts (the highlight of which was being referred to as a hippie granola cruncher type for asking the meat required with the plate to be seperate so hungry dave could eat it) and then sitting by the pool for half an hour until it was time to start out. I would pack up the lunch and stuff for the car trip and make sure we had what we might need for clothes and swimsuits for the desire to just stop the car and dive into whatever body of water is closest.
The bike ride was usually around 4 plus hours and then clean up and decide what to do afterward which meant foraging for food and then the sun was down at 6pm and real dark was around 6:45. A few evenings we spent wandering around Lahania and Paia looking in stores and watching the carvers make their wares. We brought home a little stuff but mostly toasty colour in our skin which may fade in one day of the hard cold rain that we are back to.
Good news also on the bicycle side of things!!! I have been having a lot of trouble with the shifting of my (relatively) new bike and was almost resigned to putting up with it and then our bike mechanic Dale, suggested that I take it in and leave it there while we were away (so that he could have a bit more time to figure out the problem as I stand around like a vulture when it is in his bike stand) and he figured it out!!! It turns out that the gear rings had been bent under the strain of my legs pulling the trailer up the hills with that 225lb load!!!!!! hahahahahaha I twisted a bike cassette with my legs! hahahahahahahaahaha So he put a new stronger cassette and a new chain, cables and housing on it and it's ready to pick up today.
Now to unpack, do laundry, organize things, get the bike, decide which pots to make and get back to work.
~~~~~~~~~LESSONS~~~~~~~~~~
While I was away I had a few calls about lessons and wanted to let people know that I do take students on for lessons. The studio is very small (also it is vary hard to tell people how to throw so I like to sit and work with them hands on) I only take on one person for a one hour lesson at a time. The cost is $25 which includes the use of my clay and tools ect. I don't have storage space for student clay but I also feel that it gets old and hard really quickly being opened and then only used once a week for months. This way the student gets the freshest clay and all the lumps of clay that they work with that don't turn out can be wedged back into the regular stream of studio clay. I usually ask students to sign up for four lessons to get a really good feel for the clay and that gives a little time for them to become successful.
Posted by Trial By Fire Pottery at 11:45 AM