Dedication to the Craft 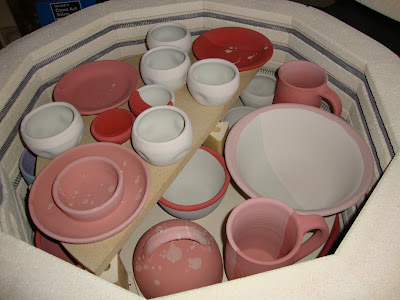 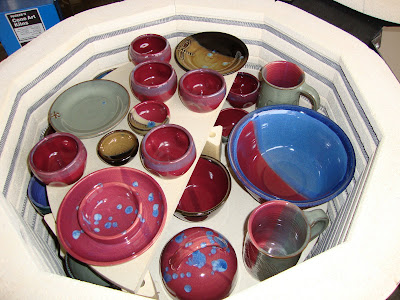 I got a cute email this morning from a clay artist that I have become good friends with here in the 'warmland' about how she was up until 4am waiting for the kiln to turn off. I think it is a really good idea to know how long the kiln fires for so we can have an idea of the efficiency of the kiln and a firing schedule is crucial as the kiln ages so that an extra long firing will be noticed.

Anyway, she must be as stubborn as I am, as her story of sitting under a heat blanket (her studio is unheated as most are) with a hot drink and waited for it to shut off, reminded me of one long night that I spent out in my carport.

Keeping in mind that I fire electric because I like it and because my neighbours would call the fire department every time I tried to 'reduce' my wood kiln. If it isn't clear by now, I live in an old part of the muni built in 1967 on those old quarter acre lots, all the houses are basically the same and the whole street was rented out to various people for about a decade making it a bit rough. Now the street is filled with kids walking around, chasing each other, playing street ball hockey (in the rain) and people walking their dogs (both on and off leash much to the chagrin of the local bylaw officer (yup just the one guy)).

Not a rough 'hood anymore unless you get a bright orange ball in the head for driving your car through the game too fast. Of course, I never get a ball in the head because I ride my bike everywhere and bribe all the kids with cookies. The cookies also help my kilns, bike and trailer and any pots that need to dry out, STAY in the carport where they belong. Everyone around knows me (some because of the tree thing, read the older blog posts) and we all keep an eye on the street. Also, the guy who lives right across from my carport smokes and works shifts that start and end at all times, therefore he is always coming and going with an eye on my front door.

Back to the start: I had met a wonderful woman on the ferry who had just gotten an email through the potter's guild she is part of, saying that someone needed to get rid of an unused kiln, so I emailed, called and went to the guy's house, had my carrier go get it and had a whole group of cyclists (who know how to lift with their legs) move it off the pallet into place, then I had the neighbour's son-in-law who is a electrician wire more power to the house, paid a whole year's potter savings for him and then worked my as$ off filling it with pots.

So here I was, new kiln, new computer programmed right out of the factory and I am too scared to turn the damn thing on.................So I turned it on, estimated it would turn off before midnight and went to make dinner. There was no way I was going to go to bed with this behemoth firing away under the spare room, visions of the many catastrophic house fires I have been to danced in my head (no sugar plums here), so I stayed in the studio working until midnight and checked on it. 2000F but not 2232F like I needed it to be. So I waited to see how fast it would get to peak temp. then my feet started to fall asleep, so I went and got a sweater and wool socks and waited longer, then I got a blanket a large cushion and a toque and settled in.

I was amazed at the incredibly slow ramp program that it was using and started to close my eyes as the red glare of the computer display was burning them. I would open one eye, alternating, just a slit to see the temp which was flashing alternately with the pyrocouple number that the reading is coming from.

I was blissfully unaware that the downstairs young man was out with friends at the pub and when they pulled up in a cab and tumbled out into the street in front of the house, laughing and talking, I really only had two choices. Try to grab everything and run for the door that they were also aiming for or stay put and pretend this was normal.

I was too stiff and cold to bolt so I stayed put. I am sure it was a ridiculous sight, the blanket, toque, cushion etc all in the carport in the dark night. We all had a good laugh and they went inside to sleep.

Magically, just after they were all inside the kiln flashed 2232F and I was frozen in that moment to see if it would turn off, it didn't, I screwed up my courage and waited, it went to 2234F and I held out hope that this huge investment (for which there was no warranty, receipt or history) had a plan to stop firing. I held my breath. Wait for it.......... then at last a click and a different display on the heartless computer display!!! It said completed and gave the firing time.

I breathed in deeply the cold are of the night and stiffly bent to pick up the cushion, I wrapped the blanket tightly and turned off the (also unknown) downdraft kiln sucker and turned to go inside.

Funny enough, the door was locked. I gave it a more aggressive tug and the group of pub goers burst out laughing from inside the dark gallery. They laughingly let me in my own house and when I finally crawled into bed my husband squealed at the shocking cold of my flesh each time he accidentally touched me!
Posted by Trial By Fire Pottery at 11:28 AM