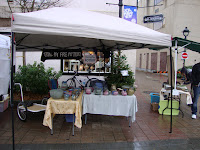 Busy week ahead, the CVAC Art Show is this week and I am there in the Gift Shop section thur/fri/sat/sun and it looks like helpful dave will be sitting the table on Saturday as I have to go to the Market. I am going to pack up my two tubs for Duncan Farmer's Market and then pack up all the rest (that will fit on my table) and take it down to the Show for Thursday 8am. I would like to ride the bike and haul with the trailer but I'm not sure if I can pack it up in a different way or make two trips. We have two hours to pack in and set up, but I'll see what I can do to avoid the car.

I have been working away madly on a wholesale order for Patti (of Hilary's Cheese in Cowichan Bay, fame) they have served their homemade soups and coffee in the most delightful yellow bowls that a potter friend made for them. She moved away a few years ago and I have offered to make any new work that they might need. Hilary brought me two bowls and a mug that they would like me to copy for their cheese shop and deli. I was thrilled and sent a long list of questions to Patti outlining what I need to know before I start.

It turns out that the bowls and mugs they have are exactly what they want and that is what I have been working on for the last few days. Jana (the potter who made them) was a very fine potter who threw on the thin side (I am a bit more beefy in my pots) but for this order I have taken the final bowl weights and worked backwards towards estimating the weight of the clay that Jana would have started with. I was amazed that she was able to get a bowl that large from so little clay so my work was set out for me!!

I made a few attempts and then went and unpacked the bowls that Hilary had brought down for me to study, were they ever light! So I tried really hard, wedged up 40 balls of 400 grams and got started. First of all, my hands are not small at all and the small balls of clay were a challenge to wedge but I quickly got used to it and after 40 balls of that size I am a pro. Then I had to figure out just how the three little "blips" in the lip were made and then practice that sweet trick.

I sat and threw them all in one go and I am very proud of them. The truth about my ability to work backwards from the final size and weight of the bowls and then guess how much clay to start with, will remain unknown to me for a few weeks when they are trimmed/dried/fired/waxed/glazed/fired and I can compare the volume of soup they would hold to that of the two examples I was given.

I should have spent all of Friday working in the studio trimming the 40 bowls but my new worker bee for the Market called and asked for help. It turned into a marathon of organization that lasted 5 hours and I wasn't home until quite late. I then had to pack up my work into the tubs and then load the trailer and strap everything down and then I had to get all 40 bowls trimmed as they were just right for trimming. I had turned the wareboards from back to front and changed the shelves they were on, as the lower shelf is much drier than the top one.
I was up until 1am, but that meant that I had time to spill my guts to nurse dave when he got home at 11. We had tea and chatted while I trimmed and then off to bed only to get back up at 7am to get all dressed for the rainy cycle into town.
I was very impressed when I got there to find that each stall on the street had been carefully marked with chalk and the numbers written in! That is a lot of work that could have been avoided if only it would quit raining for a few hours so the pavement could dry and the permanent feltpen marks could be refreshed. The Market was a good day and the ride home was damp and a little painful as my legs were pretty stiff from two, 1 hour runs last week, but it was satisfying to get home.

Well, I have to send 5 emails and then get back downstairs and into the studio to start work on the mugs. The final glazed mug weight 310 grams and by my "mathish" calculations Jana must have started with about a pound of clay or 454grams. So I have some test balls weighed and wedged and we'll see if I can get close to her volume/size and shape.
Here goes!! ttyl
Posted by Trial By Fire Pottery at 12:17 PM