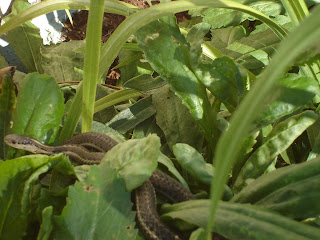 I emailed a small group of people that I know would be able to hop on a bike and come out for a casual Sunday morning ride and let them know that I would be going out this Sunday. One person replied and showed up in the morning with a bike and shoes and that sweet smile that means that they really didn't want to get out of bed to go for a ride with someone they really don't know very well.

Cycling is a very complex and emotional activity. You have to really trust the people you are out with from the basic things like being pleasant and courteous to helping in the pouring rain or snow while they have a flat tire and fingers too cold to work the pump and patches. But there are also much more subtle interactions that mean a lot to the people you ride with. Keeping up that chat on a big hill when they run out of air on their end of the conversation and you keep the thought flowing, somehow it is a kindness that keeps their pedals flowing, mentally.

Another kindness is to ask the other rider (s) what they are wanting out of the ride. Today, we were going to seek out amazing baking as a reward after a medium intensity ride. The first question was about the location of the amazing new gravel path that cuts through my neighbourhood, so we headed to the intersection and had a look, then I asked if she wanted a warm up and she said yeah!! Now, I think getting the blood flowing on a short hill or two really warms me up, but when I got home and asked race dave what "warm up" meant to other people. He told me that an easy loose spin would be ideal to get the joints moving, had I known that this morning I would not have started up a short set of two hills just behind my house!!! Sorry Sandy.

We rode along and chatted for quite a long time as the back roads around here are almost deserted on a Sunday morning so we could stay loose and laugh a lot. We did a short, fast highway section and then crossed and headed up our next hill which is steep and nasty!! A quick stop for water and we had an apetite for going "the long way" and descended a long smooth hill together.

It was very satisfying to ride down Richards Trail with a fresh set of eyes. Each time we burst out of a thick grove of trees which smell amazingly like spring might finally be here, we find ourselves slipping through a postcard beautiful valley, thick with green carpeting grass and a mist that slightly alters the colours of each hill as they get farther away or draw closer.

I heard a noise in my drive train and had to pull over for a look. It was the new cable I had just put in which had come unspun and was grating the fender and tire. I was trying to think of a way to keep it out of the way when a pleasant stranger whose house we had happenned to have stopped in front of asked if he could do anything to help. He was sweet enough to go and find me an elastic band which I used to hold the cable back and we were on our way.

We made our way through the beauty and there was a bakery with treats (just where I said it was, hahahahahaa) and conversation and more laughter. We finished the ride together and after a short play date for the dogs we parted company.

There was a small gap in our ability levels but a kindred-ness in the way we decided to spend our morning. I felt safe, that she would have provided any help I may have needed and that means a lot more to me than who pulls the hills in a bigger gear. They say that half the battle is just showing up. In this case, that's the victory! We went out a found a better version of ourselves, the version that actually went out and rode, despite the rain kicking up mud in our faces. I think that each time we do something for our souls and health, we shed a layer of skin, and like the snakes that find sanctuary in my garden, we are a little shinier for it.
Posted by Trial By Fire Pottery at 9:14 PM