sick with a little gurgling 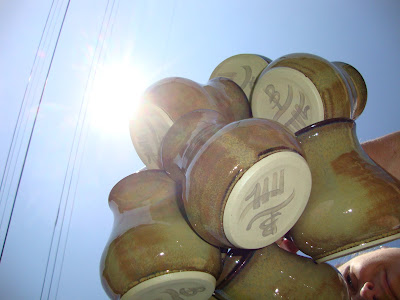 So what the hell!! I am sick. A little bug went right past my defenses and built a tiny fortress in my lungs. Now, I am not going to blame anyone for my lung guck, but I did have two mini-humans in the studio for lessons last week and I went to the doctor's office for my annual check up. These are excellent sources of pestilence but I am quite amazed that my usually skookum immune system has been compromised.

I went on the group ride from Cycle Therapy with an old friend whom I used to ride with all the time and a newer friend, and we had a lot of fun. The group found two paces that fit people and the slower group rode and laughed and talked and had a coffee afterward.

That night I had an ugly fever and serious aches and pains! Then I spent the day taking it easy and still remained fevered so I packed up the trailer for the market and went back to lie down. We had to take a car trip together but I was back in bed early hoping things would blow over. I felt a little better saturday but found the trip home very hard and had to stand up just the get enough force. Standing up with the trailer sucks and my bike and trailer were flopping in and out of traffic so when I got home it was straight to the shower and then bed.

The fever is a bold attempt of the body to kill the intruders by cooking them as a lot of bugs exist comfortably in a narrow temperature range and get weakened or killed by higher temperatures. It seems to have been working and I am starting to cough up a bit here and there. It's a great sign that some guck is starting to move but I pity the people who go out riding with me once I feel better and have to really clear things out.

On the pottery front, I have to trim a small batch of mugs today and handle them and this week the Sidney Evening Market starts so I have to pack up and plan for that on Thursday as Jamie will be here at 2pm. I am trying to help a few others to make a carpool for the long drive so we burn less gas overall. I am back in the same place as last year in front of Bistro Suisse so anyone who attends this market can find me easily amongst the huge mass of stalls and walkers that flood the main street for blocks and blocks.

Now for a nap and a lot of water before I try to work on the wheel for a few hours. Maybe a slow simmering spicy garlic soup should get started before the nap so hungry dave has something to eat after taking on the lawn. As of now he is tied for first place in the Island Cup Mountain Bike race series with Drew Mckenzie and stayed with the fastest group of pro-stars at the Tour de Victoria with Ryder Hesjedal and put a nice photo on the wall of the two of them.

Well, off to start that soup and nap!! I will not post a photo of what I have been coughing up, you're welcome!! hahahahaa
Posted by Trial By Fire Pottery at 12:44 PM