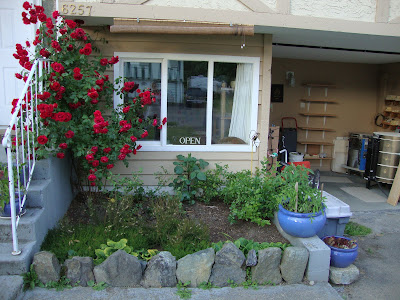 Well, things are back to normal around here. I have a customer coming this morning to find the perfect huge bowls for his wife' s birthday (he came to the Market but I only bring a few there each week) and tired, race dave and I are having coffee on the couch together. There is a bike downstairs built up just for my physical size andd special uses. It was an amazing process that was emotional, informative, and right down to the wire. Husband dave took the brunt of the emotional stuff as usual and was still able to explain bike tech stuff to me at length to help me understand the differences between the bikes that may have worked.

Dave and Sandy at Cycle Therapy did so much work getting me set up on the right bike for me. It's frame is a rocky mountain road bike but 'my bike dave' and 'bike shop dave' spent a good long time working out the best gears for my application. The problem is that 'road bike' gears are harder (to push) and in the past we have tried to make mountain bike gears work with the a road set up or we have bought the cross bike because it had a triple in the front (easier).

In the case of the new bike we(the daves) came to the understanding that the best way to go was to buy a drive train that was built to work together instead of frankenstein pairings. The problem was that I would lose the easiest gear when it was compared to my old bike. Andrew Kent came over to Cycle Therapy after the Market to help with advice on touring with a heavy load in relation to the gears required, it was very thoughtful.

The new gears, handle bars, pedals and stem meant that bike shop dave would have to deconstruct the entire bike down to the frame and build it up with parts that he had to order from off island. So we waited for parts and I drove (uggghhh) the car for a few days until I got the call that it was ready. I was at the Sidney Market and was a little surprised to hear that bike shop dave was finishing the build at 8pm!! (the store closes at 5pm)

I went in to have the bike fit tuned in for me, we had made a bunch of educated guesses during the planning process about the sizes of different things that would make the bike fit me just right. It turned out that when he started to build the bike for me with all the new components, he opened one of the boxes and found out it was the wrong piece AND it was broken!! The other mechanic, Anthony (who has recently acquired some sweeeet mugs) at Cycle Therapy phoned around to find out if any other bike shops had the correct piece in stock that we could go get and found one at Oak Bay Bikes in Victoria. Sandy (this bike shop is a husband and wife team) drove down to Victoria right then and got the new part and brought it back to Duncan so bike shop dave could get the bike done.

What amazing service!! Where can you find this these days!!

I went into the shop the next morning and had the bike dialed in for me and then took it home to haul the next batch of pots out to Cowichan Bay to the Salish Sea Gallery as some work had sold and the display was looking a little sparse. Ironically, I hit a rock on the road and got a flat tire and realized that my spare tube was a little too fat and I had lost the bike pump when they took the entire bike from me. So, half way to Cow Bay, flat tire, no pump, I called our good buddy Trevor and he was out there with a pump and tube in no time. You know someone knows you when he not only didn't offer to fix the flat for me (possible biting injury might have occurred) or to drive me the rest of the way as that too could have incurred certain wrath.

I had an offer of a 'borrow bike' from Margaret, Mark K. and Victor V and numerous offers of giving me rides in cars if that was what I needed. It was very thoughtful and sweet of people to see me as somewhat less able to do what I do without the bike.

The last step is to take the trailer hitch assembly out to Mill Bay and get it adjusted a bit for the larger seat tube that is on the new bike. Also, to anyone who would like to steal the new bike, I am having an armoured car stop by every night and pick it up then return it to my locked vault each morning.....that should reduce the options for people.

Thank you to everyone that went out of their way to support me through this process, now back to work throwing lidded casserole dishes and then tonight I am going to knit a bike cover out of pink lace...photos to follow!
Posted by Trial By Fire Pottery at 10:29 AM