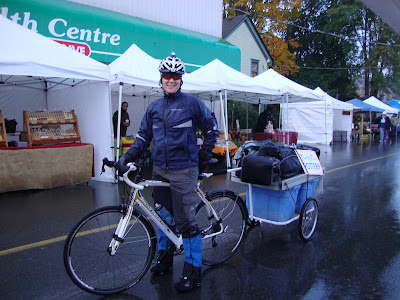 I rode out to the Maple Bay Fire Hall after attending the Board Meeting for the Duncan Farmer's Market (we were finalizing the budget) so I got there a little late. I was not surprised at all to find the "angry man" syndrome alive and well; the one guy who stands up, furious and unreasonable, and shouts at everyone about how stupid they are and what terrible decisions they have made. It was beautiful when one of the candidates stood up and explained that the Oak Bay Rec Centre/Pool actually breaks even and that we could study their systems and implement those things here....no anger, no shouting just a polite solution suggested!!

One question was posed that there weren't ANY young people there and what the candidates would do about it. I gently heckled back that I am only 33 and not that old and the crowd laughed a little.

I was very disappointed that the candidates who are tyring to get re-elected didn't have actual answers and couldn't explain what they had been doing for the last few years.

It is clear that some people are always going to vote for those with a larger public profile but it seems odd with the last few huge blunders that we are now paying for, the pool overages that aren't being paid for by everyone, the crappy RCMP station that must be replaced but no money put away for it, the water wells on Halalt lands that no one is drinking, the lack of action on invasive plants that are now a huge problem with a $5000 annual budget.

The list goes on. If we elect the same people---we will get the same results!!!
Posted by Trial By Fire Pottery at 11:55 AM