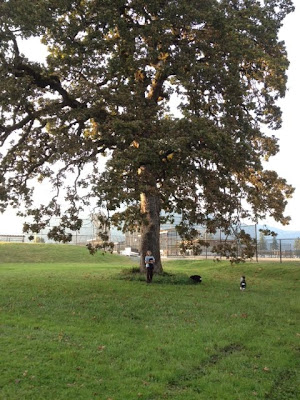 Dave and i went on a short walk (he's sick so there was much stopping for klee nex time) and he took a few photos of the dogs and i, one of them is above.

The campaign has started softly with lots of people catching up with me in town and via email saying they have heard that i am running and wishing me well. The whole plan is to run without creating any garbage (signs, business cards or printed notices) as well as not using any fossil fuel doing any driving around on the campaign trail (door-to-door, or attending meetings, this means both Crofton and Chemainus on the bike with my borrowed head light).

The other idea that anchors this plan is that no money will change hands. Anyone who thinks that my presence on the North Cowichan Council would be beneficial just has to attend the election and vote. If you think that it' s a REALLY good idea that i would represent them and serve on the council.....you can tell other people that they might consider voting for me.

Posted by Trial By Fire Pottery at 2:43 PM