Over the holidays, my sister was here from Edmonton and we were out around the valley biking and hiking and kicking butt for ten days. She has a little studio in her basement that she would love to spend more time in and needed a little mud under her fingernails to get her going again.
I thought it was a good idea to fire up my little kiln with a bisque load to see if the repair in the element would work or not. The kindly gentleman, who came to help figure out what the reason was for the kiln not reaching temperature, pulled the broken element pieces out and put in a patch. Now the reason I knew that the kiln wasn't working was because I keep exact firing records so it was super obvious when the firing time went from the consistant 12 hours to 14 or 16 plus!
The bisque fired up well and my sister was in charge of loading the whole thing while I guided and corrected and made suggestions. It kept to the ideal range of timing and the bisqueware we unloaded the next day was mature and clean looking in colour. The element patch looked unchanged at 1945ºF.
So, based on our little experiment, we waxed and glazed those pots (that were almost all made specially for customer orders) and reloaded the kiln for a glaze fire. I set the dials to 5 and left the lid and holes open to let the steam out for the first few hundred degrees.
I turned the controller up and closed her up for the top end of the firing cycle. Later that night, I came down to see how the firing was going by looking at the heat colour leaking out. I was not impressed with the heat colour so I added another 2 hours to the overall timer to give a bit more total time to reach 2232ºF.
It did not shut off in the 14 hours I had put as the max time, adusted up by 2. I added more time. Then I started to get a little freaked out as the heat colour looked right but it hadn't shut off. I knew that if I touched the kiln sitter it would be ruined as the delicate metal rod that reaches into the inferno bends if you look too closely at it when it's that hot. I didn't want to shut of the kiln with the timer because I have come to fundamentally trust the kiln sitter system. Heat melts a little block and as the block deforms the little rod moves which releases the trip mechanism. Pretty neat and simple technology from a few hundred years ago.
I did a few chores around the studio and came back. The kiln sitter was starting to move so I sat down on the dirty outdoor rug in the carport, and watched like I used to in the old days before I purchased and learned to trust the new bigger kiln that is computer controlled. It did finally trip and I stood up, stretched and went to bed. 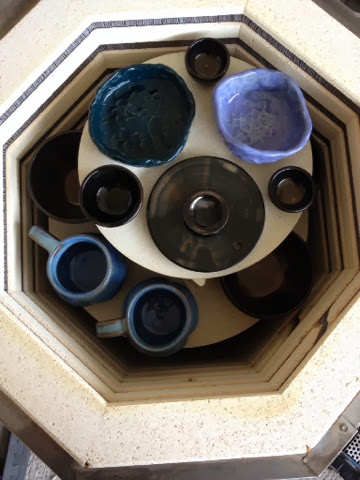 The first shot from the top showed a very dark version of my regular water glaze, this is a bit ominous and I was a bit realieved to see that the child's work was okay. 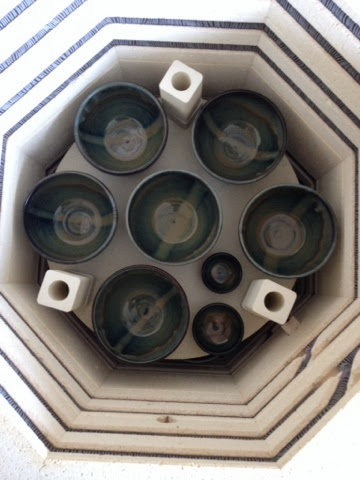 Shot two revealed the section of the kiln that is missing elements, by design, so it is going to be the cool level. The glazes in this level were closest to how my kiln normally fires. 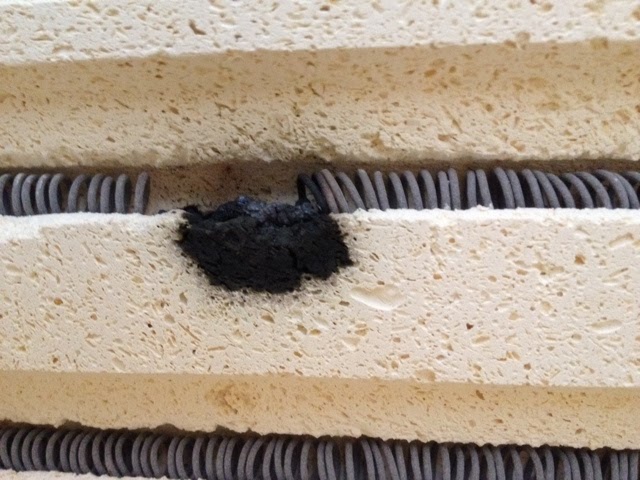 This shot is a close up of the kiln element section that was replaced. Clearly the element patch that was able to handle 1945º was not able to withstand 2232ºF and burned out like a shooting star. 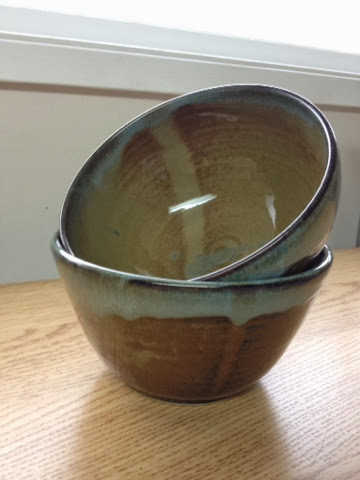 the photo above is what they are supposed to look like 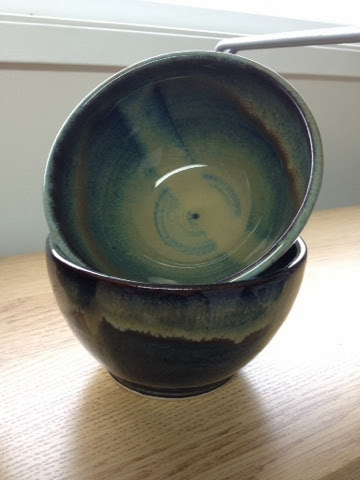 these pots were over fired, dead sexy 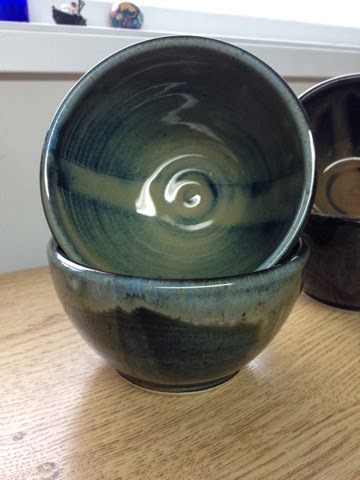 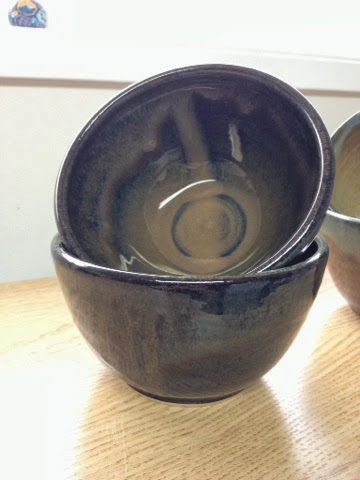 These were the hottest, and super dead freaky sexy.
None of them are for sale as I have kept them for my own kitchen and I don't sell flawed bowls (they have little volcanoes with sharp edges that i will smooth off by hand).
The next time I blog about this kiln it will be another photo stream including how I changed the elements, where I got them from, how much they cost, how long it took to complete the refit and I promise to leave out all the curse words:)
Posted by Trial By Fire Pottery at 10:22 PM